I met Ann when we first moved to this area 11 years ago. Back then we just had a one year old and her "baby" was in kindergarten. We ended up kid-sitting for their 4 kids for about a week while she and Brad went on a cruise or something fun like that. Now her "baby" is a HS junior and the only kid left at home.

We have talked on a number of occasions about the t-shirt quilts that she makes for her kids when they graduate from HS and move on to college. To be quite honest she is the only one I know who has actually done this for her kids. And I don't mean just using a couple tees, but using LOTS of tees that have been saved over the years. I asked her if she would tell us a little about how she put these great gifts together.

Here's the history behind my quilts.

My son (who is now 23) loves to hang on to things – all things! When he was very young – elementary school age, he wouldn’t let me throw away his t-shirts, even when they were too small (or too stained!) to wear anymore. When his dresser drawers were busting at the seams, I bargained with him and said, “If you will let me take some shirts out of your drawers, I’ll save them and someday I’ll make them into a quilt.” He reluctantly agreed, and every year we would tuck away a few more of his “special t-shirts.”

The years flew by and finally his high school graduation was on the horizon. I decided it was time to make good on my word and have a crack at the long talked about “t-shirt quilt.” What transpired was a wonderful project that we truly enjoyed together as he spent time choosing his favorite shirts and reminiscing about all the fun memories. We had shirts from sports teams, family reunions, church retreats, school clubs, fun vacations, town festivals and much more.

Of course, it became clear very quickly that I would eventually have to make three more for each of his three younger sisters. It has now become a wonderful tradition and during each senior year of HS we take this walk together down memory lane and create a personal history in a quilt!

Here are some of the details. 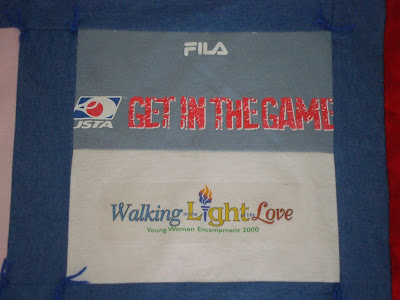 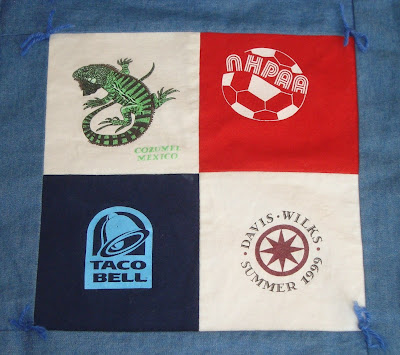 The middle quilt square below was t-shirt not quite large enough to make a 12" block, so we cut out the graphic and then appliqued it onto a plain square in order to use it. 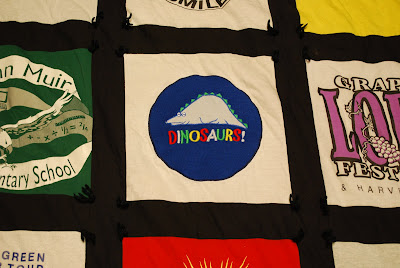 Email ThisBlogThis!Share to TwitterShare to FacebookShare to Pinterest
Labels: Do With Kids, Guest, Quilts, Renae, T-Shirts

Currently I have a few of my quilts for sale on my Etsy site.

What We're Blogging About